Home / Blog / How Your Roof Can Help Fight Climate Change

How Your Roof Can Help Fight Climate Change

Acacia Smith explains the Albedo Effect. And, how your roof can help fight climate change.

The majority of the roofs in the world are dark-coloured and as a result have a low albedo and absorp excessive amounts of heat.

The majority of the roofs in the world are dark-coloured and as a result have a low albedo and absorp excessive amounts of heat. The ‘albedo’ of a surface is its ability to reflect solar waves; dark surfaces reflect very little whereas light surfaces such as ice have a high albedo and reflective ability. When sunlight hits a white surface, it bounces back and passes through the atmosphere. But once it is absorbed through a dark surface, sun is transformed into heat, which when reflected back during the night cannot pass back through the atmosphere and so remains in circulation.

The low albedo of cities is a problem felt in many urban areas and contributes to the ‘urban heat island effect’ causing deadly heat waves in cities.

The most recognisable outcome of the low albedo of cities is a problem felt in many urban areas throughout the world; the ‘urban heat island effect’ (UHIE). As naturally climate regulating vegetation is removed in favour of infrastructure, cities become pockets of higher temperatures. The difference between heat absorbing urban areas and their surrounding hinterland can be up to 5° degrees. The layers of smog that smother many cities today and the carry on health effects that are increasingly prevalent, are a result of UHIE.

Image depicts a lightweight green roof that captures rainfall and cools the roof compared to the grey roof to the right.

One way to increase the albedo of a roof is to plant vegetation. Rooftop gardens, and green roof systems such as the LiteN’Less System, create a buffer preventing heat from entering the building. They have a positive impact on temperature both within the building and outside as well as improving air quality. Green roofs may be one of the only ways possible to reduce UHIE and to adjust the urban fabric of our cities to cope with increasing temperatures and fight against climate change . By regulating temperature variability, green roofs also reduce energy consumption. They provide added insulation in the colder months and prevent excessive heat absorption in the summer.

Vegetated or green roof systems reduce the heat flux through the roof.

Green roofs are gaining popularity rapidly. Several cities are beginning to encourage green roofs through legislature and tax incentives. Toronto has a green roof bylaw, standard and incentives.  New York is offering tax rebates to people wishing to install green roofs. Tokyo has a policy  that requires 20% of new government buildings and 10% of private buildings to have green roofs.

“It just doesn’t make sense to leave thatspace unused when we could transform our energy future and reduce urban heat island effects with all the options.” Laurel J. Standley, Ph.D.  ~  Scientist, Author

Acacia Smith wrote the above for the Sustainable Business Toolkit which offers strategies, tactics and tools to help small business grow and propser.  To learn more about what they do click here. 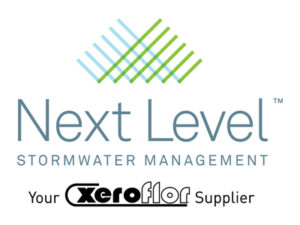 Next Level Stormwater Management prides itself in being a hassle-free, one-stop-shop supplying vegetated roof systems that can be customized to local requirements, with warranty and maintenance support. We also offer ​access to a variety of analytical support service​s such as ​stormwater calculations specific to location ​and building/roof type.

© Copyright 2022 Next Level Stormwater Management
Back to Top